Events of the past 18 days have triggered an unexpected acceleration. Until last month my research showed that a war in the Middle East could take place during 2024-2025. In light of the recent events, that conflict could now start as early as 2020-2021. 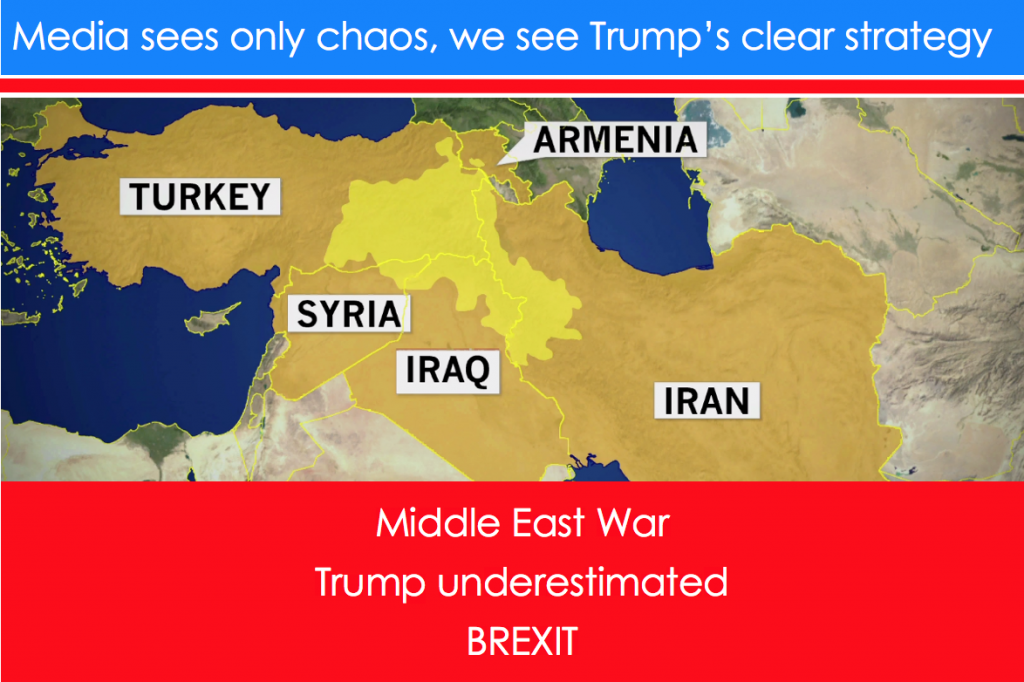 It is important to remember though that I don’t focus on point forecasts, I produce rather scenarios and rationales based on completely independent research.

Markets continue to refuse to price in the growing Geopolitical Risk Scenarios that are gathering over the horizon. In light of this Gold and other safe assets may still have significant upside potential.

I. Brokered Cease-Fire is a Surrender

While the White House is trying to portray the brokered 5 Day Cease Fire in Northern Syria as a victory, few independent military experts could agree. As of the end of September North-Eastern Syria was:

The beginning of the end for President Trump?

As a trained economist I like to think in hypotheses and probabilistic scenarios. I present to you the one consensus is rallying around and my current working hypothesis. One which connects almost every key event in recent weeks to a body of logic.

(a) If President Trump took a rushed decision based on his flawed character or was ill-advised as consensus says, we are dealing with a painful miscalculation. Consensus is incensed and sees utter chaos.

(b) If instead the recent events are part of a strategy, then it is a shrewd & smart one. I see logic and purpose behind the many events of recent weeks and months – not much chaos.

Based on hypothesis (a) the action by President Trump is best described by his so far staunchest supporter in the Senate, Mr. Lindsay Graham as “the biggest mistake of Trump’s presidency“.

In the case of (b), the Kurds became the collateral damage of the strategy of the Trump Re-Election Team – which in my opinion is increasingly driving US Policy since December 2018.

I personally believe, the strategy of the Trump Re-election campaign is smart, but not properly thought through in key details (I explain why below). The Trump Re-election Team may have had by-pass the State Department and the Pentagon, and ended up overlooking that

The rest of this analysis is not shown to the public

I am giving the Re-election Team the benefit of the doubt in this. My working hypothesis is that their strategy is smart, but somewhat improvised and naive by design in some details – since it could not gather full intelligence support from the professional branches of the US government in order to keep it confidential. An understandable reaction to the relentless leaks on the current administration by liberal holdouts to feed the media and the DNC’s impeachment drive. Thus, the Democrats have to take their share of the responsibility for this.

I currently believe that the Republican Party can win the 2020 Elections and that many are asking Mrs. Nikki Haley to prepare to lead the GOP ticket. The Democrats have made many mistakes that have given an advantage to the Republicans. The constant impeachment efforts from day one of the presidency in 2016 were not a smart idea, voters have become saturated. Still, the 4th Democratic Debate showed that Mr. Biden and Mrs. Warren are flanked by some intelligent candidates that are not all as radical on the left as conservative commentators had portrayed.

No Way Back – faster forward to war

The Turks won’t give this land to the Kurds. Land for Peace is a Western concept that doesn’t have many followers in the Middle East.

October 2019 is likely to go down in history as a watershed moment.  As a result of Washington’s move to pull out US troops from Northern Syria, a War in the Middle East is now the 2nd most likely Geopolitical Risk Event.

We continually analyse and monitor the 10 most likely Geopolitical Risk Events that could affect the world economy and financial markets. Their probabilities need to be updated regularly as well.

First, I disagree with consensus as it puts all the blame for Turkey’s bold foreign policy on President Trump and America for that matter.

Truth is that Europe has been appeasing and enabling Turkey for at least 20 years. Ankara has learnt that Europe has lost her moral compass to stand up to it. Adhering to their cyclical view of history, Ankara believes Turkey is rising again and the West is in decline. Thus the West will bow to it. All they have seen from Berlin, Paris, London and Washington in the past two decades confirms their strategic and historic views. Ankara is emboldened.

Need an example? For years now the Turkish Air Force is infringing EU air space (over Greece) on a regular basis. Lacking a proper military force and therefore any credible deterrence, the EU response has been to look away and to appease Ankara. In May 2017, EU airspace was violated 141 times in one day. The EU bowed down. This is the predictable pacifist Foreign Policy of Western Europe since WW1.

Second, I also disagree with consensus as it sees only chaos and randomness resulting from Trump’s lack of character or incompetence. Strange that so many experts agree with this popular conclusion.

As an analyst I think they overlook a pretty logical strategy. If correct, it would be sad that so many bright minds are carried away by consensus, emotions or ideological agenda.

My independent analysis of the US Political Process and US Foreign Policy are both signalling that President Trump may have embarked on a shrewd & smart Re-election Strategy in December 2018. I noticed the clear shift in Dec 2018, but have only been able to discerned its logic between June and October 2019. The 7 elements of this strategy were corroborated in the past month.

The Trump Re-election Team’s strategy is to

President Trump would then reach November 2020 in a similar “outsider” position as he did in 2016. Fighting most of the establishment in Washington. Mrs. Nancy Pelosi, the Speaker of the House, has tried to avert impeachment, but the radical wing of her party has prevailed and taken the bait.

The White House may be miscalculating

Although the strategy seems to be working, the President risks overshooting.

He still has a base supporting him, but we see that a growing number of veterans and Christians would prefer to support a true conservative candidate with integrity – or simply stay home on election day. The President was carried into the White House by a rare cluster of constituencies: but the most underestimated ones were the Rust Belt and the evangelical Christians. It could be that he feels that his close relation to a few Christian advisers will secure him the support of the huge evangelical and born-again communities (25% of voters).

But the way the President talked about the Kurds has appalled many Christians across America given the nature and tragic history of the Kurds. The President may be overestimating the reach of his external advisers among Christian voters. The same group that helped decide the 2016 Election for him, may just be the group that hinders him from seizing the White House a second time.

Most experts in media and the financial industry were wrong once again. Prime Minister Johnson was capable of reaching a BREXIT Deal with the EU. The EU renegotiated with him and the backstop is gone. The problem is now Northern Ireland’s DUP. They don’t accept the compromise.

The consensus is that tomorrow – Super Saturday – the new BREXIT Deal will be narrowly rejected.

Since early 2016 my independent analysis on BREXIT has delivered a surprisingly steady outcome: the most likely outcome is that the United Kingdom will exit the EU. Despite parliament’s and judges’ opposition to the referendum result, I see a hard BREXIT having more chances than a soft BREXIT. A No deal BREXIT being part of the hard BREXIT scenario cluster.

Although tomorrow’s vote is an uphill battle for the Prime Minister I think it is worthwhile to ask the question: How many are likely to vote for the deal. How many additional votes does PM Johnson need?

Based on their voting record, their current political posture and predicament 314 MPs are likely to support the Deal. This includes only 20 conservative rebels, since 3 of their leaders are likely to oppose the deal.

The Prime Minister is lacking therefore 6 votes. That means he may have to sway altogether 11 active Labour MPs to reach the 320 majority. This is how it could look like if the Prime Minister gets the votes. 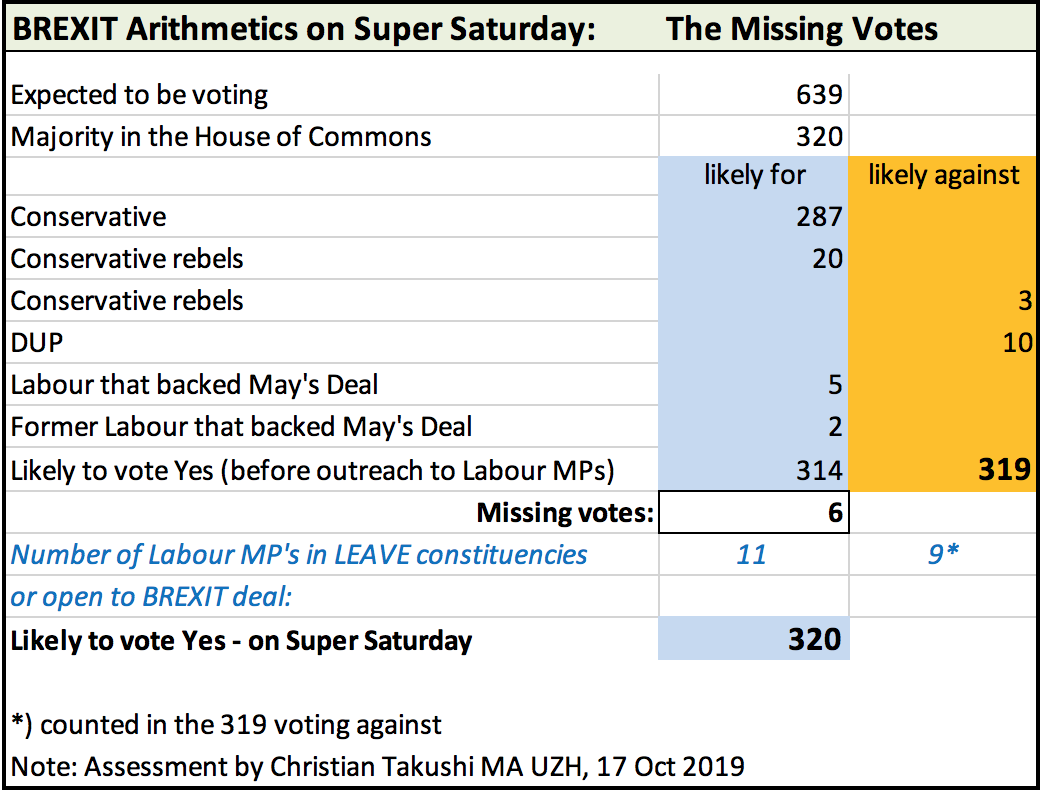 Why do I think that the Prime Minister can sway roughly half of the Labour MP’s in LEAVE Constituencies?

Yes, it will come down to pragmatism versus emotions-fears-ideals. Despite the relentless crusade of the UK Parliament to frustrate BREXIT one way or the other since 2016, I tend to think that MP’s will as a whole allow pragmatism to overcome emotions & fears tomorrow or when parliament convenes to vote. Otherwise they might be tossing the UK and their own political careers into the unknown.

What we have on the table is surely not a perfect solution for anybody. Least so for the Prime Minister who was also asked to cross over his own red lines. But if everybody is willing to lose a little now and put pride aside, I am convinced the United Kingdom and the EU could both benefit in the long run.

The No Deal Brexit would have produced the most short term chaos, but also the biggest upside for the UK. Britain – it seems to me – is ready for an orderly divorce with less uncertainties (risks) for the private sector, but also less upside in the next 5 years. Potential gain is connected to the amount of risk you can take. But economic gain is not the highest “goal” in a society. Order and trust in the institutions are foundational and more important. Any more delay in carrying out the referendum outcome would inflict permanent damage to British democracy, with potentially serious consequences for decades to come.

Sometimes it is better to forgo the perfect option with a few, to embrace the second best with many. This is the better solution for

I will be watching this closely and reporting to you when my analysis deviates from consensus again.

If you want to see the full text, kindly write to c.takushi@bluewin.ch