Here my latest research on the Middle East and Latin America.

Turkish Armed Forces have entered North-Eastern Syria. There is widespread panic in the Kurdish and Christian populations of North-Eastern Syria, which had been protected by US special forces. Kurdish forces have been the “boots on the ground” for the United States in the fight against ISIS. The whole region is adjusting to this new situation.

US disengagement, but Ankara’s timing

Our independent ongoing analysis of the Middle East shows that Ankara has once again surprised European and US counterparts with a very proactive, bold and well timed move. Ankara signalled it was moving into North-Eastern Syria, putting Washington under time pressure to make a kind of lose-lose decision. Either staying in the region to shield the Kurds or pulling US troops out of the region to fulfill campaign promises would put President Trump in a difficult situation.

President Trump opted for the strategic decision to end US involvements in foreign wars. But timing is everything. That clear long term goal has popular backing in the United States. But unfortunately it has some short term effects

For the first time since 2016 I estimate that President Trump’s re-election in 2020 is at risk. He has triggered the anger of the Pentagon, patriots in both parties in Congress and many US veterans. I often think that Americans are for the most part patriots in the first place. The USA has abandoned allies before, but the timing of the White House’ move may have shaken a key pillar of President Trump’s voter base. Many in the USA see the US pull-out sends a terrible message of weakness vs Ankara & Teheran and of betrayal to loyal allies. The US Military is concerned. Many of the men and women serving in the US Armed Forces are very principled people – letting down loyal allies is something that could make some veterans stay home in November 2020.

We have warned in recent months that President Trump’s disengagement policy and his highly predictable “we won’t retaliate” stance has made US foes particularly assertive if not aggressive. US foes believe they can hit US interests and US allies at will, because President Trump wants to get re-elected. In my independent analysis, the decision by President Trump in June not to strike back at Teheran after it downed a US plane, was a game-changer. It sent a serious sign of weakness. The Pentagon has a point: Disengagement should not signal weakness as such could lead to more risks and conflicts.

Kurds look to Washington, and Jerusalem

The timing of Turkey’s announced “invasion” (as Western military leaders see it) into Kurdish-inhabited Syria is not a coincidence: Mr. Draghi is a lame duck, Merkel’s Germany is on the brink of recession, the German banking system in disarray, Brussels is trying to salvage a Brexit deal and Israel has no effective government.

Contrary to what you may have heard on TV. The Kurds’ closest strategic ally is Israel. Currently, the US happens to be their main ally, but that is only temporary. Jews and Kurds share the fate of being surrounded by states that desire their extinction – a powerful motivation. But sadly for the Kurds, Israel has not been able to form a national unity government yet.

The Israeli president and Israeli military circles are urging all parties to form a national unity government. One such government was formed in Israel’s history in times of war or imminent war. Israel is bracing for a possible war and the Kurds are hoping such a broad-based government will be formed sooner rather than later. But Israel has miscalculated – it believes its biggest threat comes from Teheran.

Why this area in Syria?

You may remember my analysis & chart pertaining to the future route of an Oil/Gas Pipeline from Iran to Europe via Turkey – Ideally such a pipe goes through North East Iraq and North East Syria. The last bit still firmly in the hands of their Kurds is at stake now. If Turkey is successful, soon Iran and Turkey will control all the crucial territories needed for such a pipe. In a way Ankara is simply seizing on the strategic errors of Europe of the past 30 years.

Europe failed to secure a sustainable & safe source of energy. It urgently needs energy alternatives. This is where Turkey is positioning itself to play a key role. Whether France and Germany will help finish to build this pipeline or not, remains open, but it could give them additional strategic maneuvering space. Such a scenario opens great opportunities for European companies and nations, such as Romania. 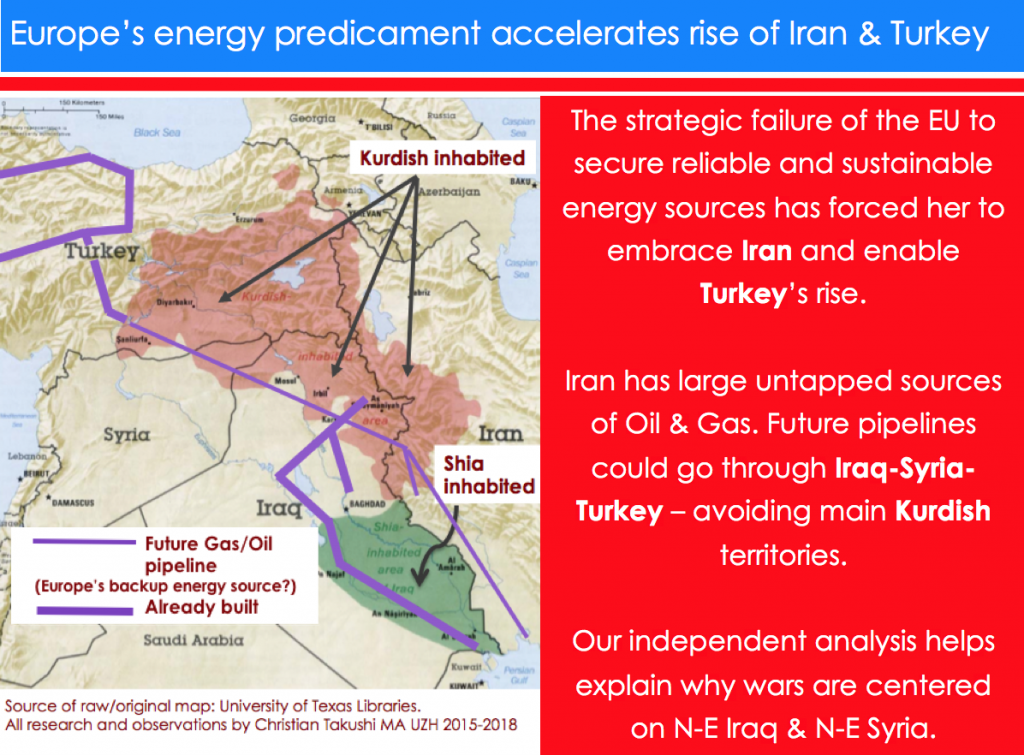 The EU is in a very ambivalent role. Turkey is rising thanks to the support of the EU and also thanks to Europe’s tolerance of Ankara’s assertive policies. This shows also how smartly Ankara is playing its geopolitical cards. Many in the West portray President Erdogan as a quasi-dictator, but what they omit is that a majority of Turkish voters, especially outside the big cities, has given support for his policy course.

Europe is increasingly in the grip of Turkey. Important thought-leaders in Europe desire a closer integration of Western Europe with the Middle East & North Africa. The liking for Ankara and Teheran in private contrasts with the stance in public. Given the popular discontent with Ankara, most governments officials criticise Ankara in public.

Turkey and Iran are the rising powers in the Middle East, and their influence on Europe is on the rise – on multiple fronts.

It sounds odd, but the Middle East is edging closer to war and a Peace Deal. The peace deal is likely to lead to war and vice versa. A major war will mobilise world powers to impose a peace deal on the Middle East. But should the crises lead to a Peace Deal, such a deal is likely to be taken advantage of (as such deals have over the past 3’000 years in the Orient) and lead probably to an even greater war.

The region is close to Europe: any nuclear contamination would reach Europe rapidly. Europe could also suffer in a Middle East war directly, because the EU is widely seen as having taken sides for Teheran. Any disruption of the Maritime Trading Routes would hit the European economy very harshly.

Russia could be the biggest winner of disruption scenarios. Arms sales would sky-rocket and the land routes via Russia’s mainland would be precious. Russia could close the gap to Western Europe. The EU embargos on Russia have prepared her ideally for the following scenarios:

Widely unnoticed by mainstream media something very troubling is unfolding in Latin America. A phenomenon that has not quite escaped the attention of investors.

The Left is rising in Latin America and it is forcing us to put our positive assessment of key Latam nations under review.

Allow me to recap just the latest events:

Brazil: The conservative government of Mr. Bolsonaro has failed to bring the economy on the path to an Open Market Economy. The Left has proven to have a firm hold on the system – a subsidies mindset is hard to change.

Argentina: The Left is expected to win the coming elections and to bring a mix of populist-leftist-anti capitalistic measures. Argentinians may want change, but they are probably not ready for market discipline.

Bolivia: Former President Morales wants to rule his nation for a 4th time. He exemplifies the mix of populist leftist traits that is so successful across the continent.

Ecuador: The nation is in a state of emergency after the government decided to discontinue fuel subsidies. It is likely that the Left will seize power. Confidence in the economy has been shattered.

Venezuela: Mr. Maduro’s position has been strengthened. The expected return of the Left in Argentina and the advance it is making across the continent has greatly emboldened the dictatorship. Caracas has gone on the offensive and is now seen as actively meddling in the political affairs of other nations.

The above developments would have not worried investors in years past, since all these economies are members of the MERCOSUR block of nations. They were seen as Socialist-Leftist states that believe in state interventionism and subsidies. Many of them embraced a Revolutionary Socialism that Mr. Hugo Chavez championed, and that leaders in Brazil and Argentina supported during many years. The problem is that the healthy economies of the conservative Pacific Alliance (PA) are also shifting left.

Mexico: The largest economy in the Pacific Alliance shifted left and the new government is taking populist measures. Mr. Lopez (AMLO) is seen as having close connections to the regimes in Cuba and Venezuela.

Peru: The President has closed the Congress to overcome a blockage and has called for Congressional Elections. Since he is seen as supported by the Left and enjoying broad popular support, fears of a shift to Leftist Populism are growing among investors. Although Peru has proven to be committed to democracy and market economy principles, many investors wonder if Lima can escape the powerful regional shift to the left.

Chile, the most successful Pacific Alliance nation began to shift to the Left years ago, but it has been able to tame investors’ concerns so far. Colombia seems, at this point in time, to be the only successful Latin American economy that is not giving foreign investors serious concerns.

In itself the situation in every country could be explained as a rather specific phenomenon. But international economists and strategists are there to see patterns and wider undercurrents. Indeed, something seems to be happening in Latin America.

Violence in Ecuador and the threats of a Coup could be seen as isolated. But they are probably not. Although the current government has miscalculated, the multi-pronged strategy of the opposition points to international coordination.

The return of the Left and of Socialist parties is broad-based. Many critics overlook that this movement has many colours: from revolutionary to liberal and even market-friendly. Thus, not every shift to the Left is equal. The problem for some nations is that investors are aware of the long history of similar events – of tendencies that start with good intentions, but that tend to end badly. Investors don’t ask questions – they simply move on. It is up to government officials to seek dialogue to explain their policies. Something that sadly, so far, most Latin American governments are failing to do. Some of the parallels investors are concerned about …

The above is simply an array of criteria that professional investors in Emerging markets and Frontier Markets are using to limit their risks. That Peru, Latin America’s model economy, is going through a destabilising political crisis that is widely seen as benefitting the Left is a special situation. But what has alarmed many foreign investors is the high level of popular support for the closing of the Congress in conjunction with efforts to fight corruption. They have seen this before in other countries. While I have sympathy for the popular measures taken by Peru’s executive branch, most Investors have become cautious with massive efforts to fight corruption. Endemic corruption is often a structural or systemic problem.

We are monitoring Latin America’s shift to the Left. Should the early signs be confirmed, investors will be advised to shift investments to other markets. We will look at every market individually though.

To read the full article, kindly write to c.takushi@bluewin.ch

US Voter revolt: Resurgent Trump wins big – we reiterate a TRUMP SHOCK to the system is coming

Geopolitical Update: Action in Germany and Latin America over the holidays