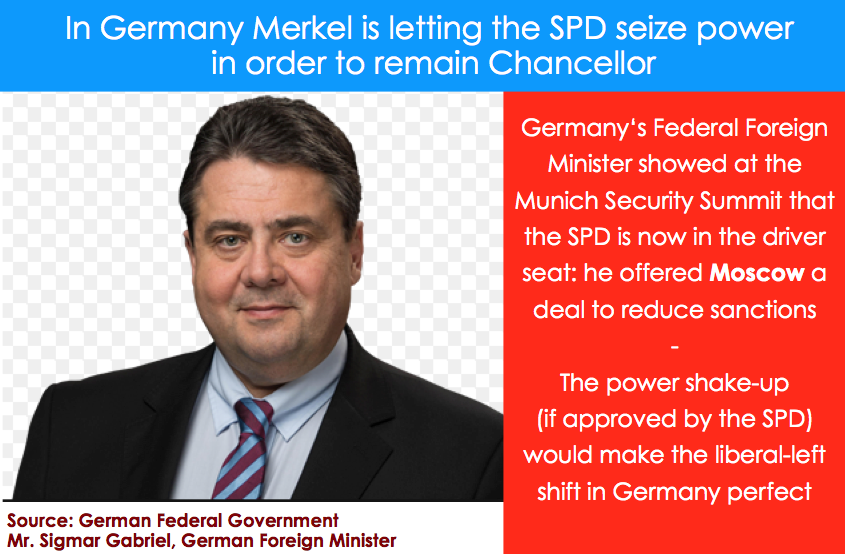 This is an update on the European geopolitical-political process.

Of all things we are monitoring in Europe two important developments stand out over the past 10 days – and we see consensus lagging behind again. 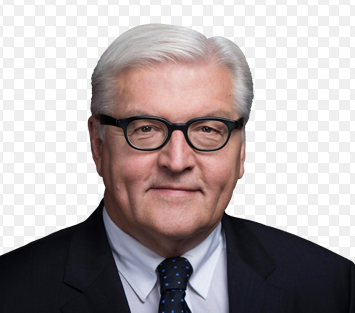 Germany has finally a new government coalition: Mrs. Merkel followed through the mandate that Federal President Steinmeier gave her. In a nutshell it was to “form a coalition government regardless of the price, or Steinmeier would call for new elections”. As we have said in 2017, Steinmeier wanted Merkel to remain chancellor; a weaker CDU/CSU chancellor, means a greater role for his party (the Social-Democrats) and the liberal-left agenda. Mrs. Merkel managed to secure her position as chancellor, but she had to make massive concessions to the Social Democrats (SPD). A magnitude of concessions we have never seen in post-war Germany. The CDU/CSU “won” the elections, but the SPD is now on the driver seat. Steinmeier’s wish, the Great Coalition or GroKo (for Grosskoalition) has become reality. The loser of the German General Elections in September has staged a coup and “seized the power” thanks to Merkel’s desire – or rather obsession – to stay in power.

This confirms many of our predictions which we have been sharing since September 2017: What we had not foreseen though, is the speed at which the SPD and Moscow are seizing the moment. 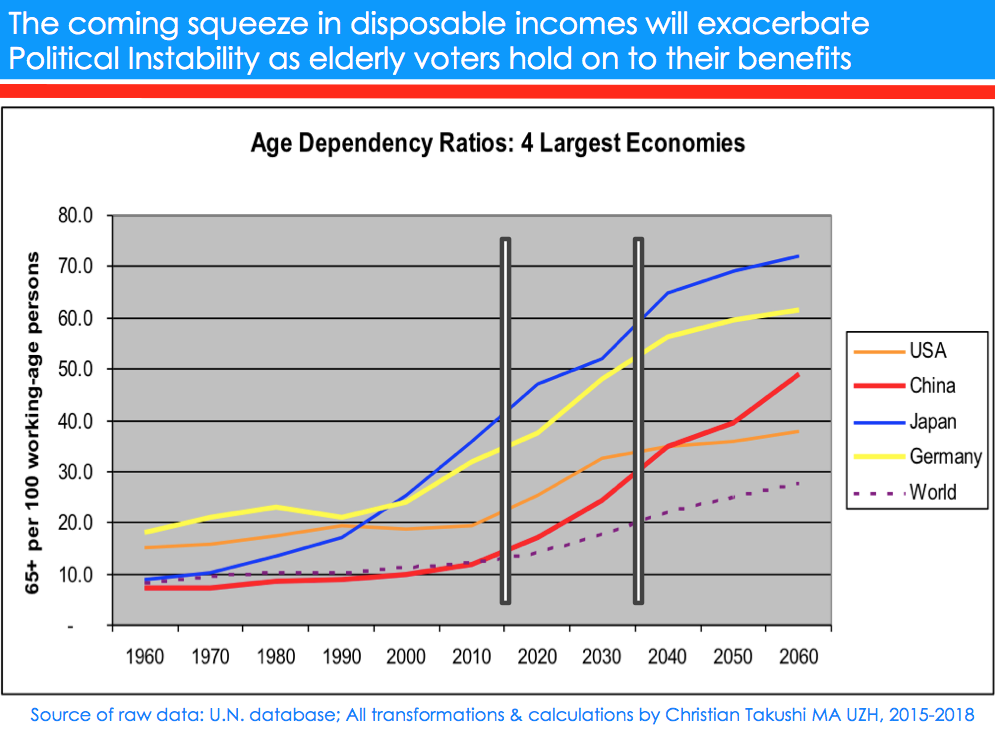 We anticipate that the established parties CDU, CSU and possibly SPD could suffer as a result of this renewed Great Coalition – Smaller parties in Germany now have the best opportunity since the end of WW2 to become a more dominant force in Germany. Of all the second tier parties I think the Greens (Die Grünen) and the Free Liberals (FDP) will benefit the most in the coming years, followed by the conservative AfD (which is hindered by her own internal power struggles and a recent pull to the far right). It will be worthwhile monitoring how the shift to the center pays off for the Greens and the renewed commitment for a liberal, but classical (i.e. conservative) economic order pays off for the FDP.

At this stage of our analysis, I expect that the role of the state in European society will grow even more. This does not only include the number of people working for the state directly or indirectly. It includes also those working for private enterprises that live off government regulations and subsidies. It further includes those depending on government subsidies directly. Last but not least, Germany and France have entered a period of rearmament, and those soldiers will be also state-employees. Just as the USA is reducing regulation and trying to limit its scope, European governments are likely to grow further yet. This will influence the way people vote of course – Continental European voters run the risk of becoming ever more risk-averse, just as on the fringes new political leaders and parties seize the big vacuums left by formerly conservative and left parties. They will be seen as uncomfortable disruptors, which will exacerbate the political polarisation. This polarisation will also be fed by Germany’s fast deteriorating demographics. Germany’s Old Age Dependency Ratio (OAR) will go from currently 33 to over 50 over the next 20 years. Fewer younger workers will have to pay for more longer living elderly voters. That foreseeable squeeze in disposable incomes is something European political leaders struggle to speak out in plain German or French. Economics, demographics and politics are all interconnected.

Point two follows from point one: 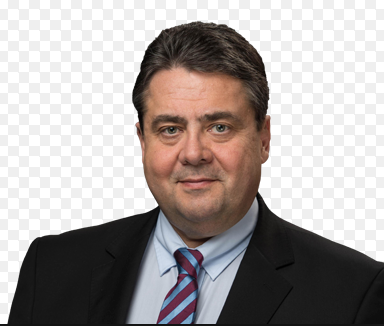 The ink of the coalition agreement was still not dry yet, the SPD’s heavy weight, Mr. Sigmar Gabriel, went on the geopolitical stage at the Munich Security Summit and deviated immediately from the former tough course of Merkel against Russia. Mr. Gabriel met with Russia’s Lawrow at the Munich Summit and expressed his desire to reduce the sanctions on Russia in exchange for some limited progress in eastern Ukraine. This showdown of Realpolitik was the best news Moscow has heard from Berlin in years. Gabriel is theoretically a lame duck Foreign Minister and as such expected to be a mere caretaker. But Mr. Putin would be ill advised to open a bottle of champagne, the move by Mr. Gabriel was mainly a message to Mrs. Merkel, her CDU/CSU and political Berlin. the SPD is back and it has seized the main posts of the new German government.

The SPD will now exercise a much more liberal-left course in Germany’s Foreign Policy. We thus expect a more visible embrace of Teheran, Palestine, Moscow, Brasilia (Mercosur) etc. This has not gone unnoticed in Washington though.

The Foreign Ministry in German politics is the most sought after post among insiders – It is a fast track for rising political power.  This is thanks to the new post-war German constitution (Deutsche Bundesverfassung), but also thanks to what Hans-Dietrich Genscher made out of the German Foreign Ministry or Auswärtiges Amt (AA) as it is known in Berlin. Genscher faced and overcame great challenges (Cold War, risk of nuclear holocaust, terror etc) during his long tenure from 1974 to 1992 and he walked the corridors of power like no other. The revered liberal conservative FDP leader greatly enlarged the reach of the Auswärtiges Amt, earning the respect and confidence of the German government apparatus and other Western capitals. Germany is the most welcome and probably also most trusted Western power in the most diverse conflict regions around the world.

Please, bear also in mind that the current German Federal President Steinmeier was for years the Foreign Minister (Aussenminister). It is remarkable therefore that we now have the most powerful political leaders on the political Left in Germany (Steinmeier and Gabriel) flanking Merkel. De facto Merkel is reporting to Steinmeier, while theoretically Gabriel reports to Merkel. But since Merkel owes her job to the SPD support, that reporting line has de facto become a relationship of almost equals. I wouldn’t be surprised if Mr. Gabriel would be confirmed as Foreign Minister in the new cabinet in March.

Making matters worse for Merkel and her CDU-CSU, Merkel is not strong in public discourse and in handling dissenting views in public – She is rather used to manage people & issues behind closed doors. But Steinmeier and Gabriel are both charismatic and eloquent leaders that enjoy the public debate. Although they may disagree with the SPD on many issues, many conservatives in Germany have a great deal of respect for both Steinmeier and Gabriel. Both men can also deal with ambiguity, even publicly. Thus, Merkel is likely to soon face many situations where she will look like lacking control (her management style) or confidence and where the SPD top leaders will outshine her. The SPD has now its two most outspoken and charismatic leaders occupying two of the three most prestigious positions German politics has to offer. It makes also sense for Mrs. Andrea Nahles to become the new head of the SPD Party – A more cautious, reliable and competent personality like Nahles will be the perfect combination to stabilise the party after heavy losses in recent years and to buffer any shock waves from the rather outspoken Gabriel and Steinmeier. The SPD is likely to be a too formidable coalition partner for Merkel.

For that reason I don’t expect Mrs. Merkel to finish her term as chancellor. Our independent intelligence gathering in Germany is giving us hints that even a majority of CDU-CSU voters no longer wish Merkel to stay in power. Over the past 4 months, it was obvious no one wanted to enter a coalition with her – she should have stepped down for the sake of progress. But she has missed the ideal time to step down graciously.

We can now thus expect that Berlin will work towards a warming-up of relations with Moscow. It is not a warm embrace, but the Socialists in Germany have always had a rather positive and at times warm rapport with Moscow. This is now playing out before our eyes. Warsaw, London and Washington were quick to object via back-channels, but the weight of Germany in Europe is so strong, we should expect Germany to continue advancing this strategic shift to the liberal-left camp.

The liberal-left shift of Europe may usher more integration

We have been warning since the second half of 2016 that Germany will shift to a more liberal-left course. With France currently also on a liberal course, and Britain exiting the EU .. I maintain our Outlook for the EU: The EU is shifting to a more liberal-left course. But one with some centrist traits. German politics is changing: The SPD and the Greens now also accept or favour a stronger German military. While Merkel shifted the CDU and CSU from the traditional right to the liberal-center, the Greens and the SPD have shifted from the traditional (combative) left to a more left-liberal-centrist course. The only common denominator they all have is the liberal ideas and goals, liberal in the modern progressive context though. With liberal goals increasingly providing the common ground for policy-making in Berlin and Brussels and to some extent in Paris, too, the EU has a pretty clear direction. The risk is that the USA and Europe are on a collision course.

It is amazing that just 9 months ago the overwhelming consensus in Europe saw France and Germany shifting to the right. Neither analysts nor financial media have addressed the reasons for their failure in misjudging the popular vote in Britain, France and Germany in a matter of just 15 months. Consensus itself has become dysfunctional.

I deem France’s liberal course as less predictable and stable than Germany’s though. The liberal course of Paris will greatly depend on the situation in the Middle East and how it impacts France’s inner security.

We maintain our forecast that the European Integration Process will be accelerated – something many political analysts in Europe would disagree with. I believe the EU may not survive, but it will be the platform for a future European Federation. The European Continent may therefore see one of the first Super States – and I think such Super States will arise on all continents, partly in response to a European Super State and the overlapping crises that shall overwhelm many nation states.

Understanding a Rising Germany will be a competitive edge

Germany is a rising power – thus, reading Germany correctly will be important. Sadly most political analysts in the West know little about the German political process and postwar political history. We can’t blame them though, Bonn and later Berlin made politics in Germany exceedingly boring – Merkel is just the tip of the iceberg. And maybe it takes a bad showdown or a “Debakel” by Merkel as Germans would say to trigger a change. Foreign Minister Gabriel may have hinted at a more vocal and daring German leadership in the world last week in Munich: he said emphatically “Die Welt ist am Abgrund” (the world is on the edge of the abyss) as he addressed the many threats to humanity and warned about the consequences like no other German leader has expressed since probably Mr. Genscher.

An increasingly self-confident Germany is rising and fostering alliances with China and Iran – nations that defy the US hegemony. Germany is thus challenging the USA already. Too early? Time will tell.

Note: None of our analyses should be interpreted or construed as an investment recommendation

Announcement: After 7 years of sharing his geopolitical analysis for free, Takushi is introducing a subscription fee – albeit a modest one given our many readers in emerging economies: $180 yearly. You can subscribe at the bottom of our website. Access will be restricted in due course. Thank you for your trust.

Geopolitical Update: Why the CSU wants to bring down Merkel, it is not Immigration