Geopolitical Macro Update: A political crisis is unfolding in Germany

Dear reader
A serious political crisis may be unfolding in Germany. Aware that many analysts are not acquainted enough with the German political process, Berlin is trying to put it out before the world takes notice. They tell us that it is all about the Alternative für Deutschland (Alternative for Germany or AfD party).

On Sunday 24 Sep 2017 Germany experienced probably the biggest surprise in post-war politics. A double shock to Germany and the liberal world order: a “revolt” of mainstream parties against Mrs. Merkel has magnified the rise of the conservative anti-immigration AfD Party as third largest political force. The AfD won 94 seats in the German Bundestag (Parliament). And that double shock was followed yesterday by a dramatic “coup” attempt within the CSU against Mr. Seehofer, leader of the Bavarian coalition party of Mrs. Merkel. The “coup” was postponed, but the price for Seehofer to keep his position ahead of coalition talks in Berlin was a tougher course on immigration.

Some say politics as usual, but there is a problem. The CSU faces elections in Bavaria next Fall 2018 – they lost so many voters to the AfD in 2017, on this course CSU leaders acknowledge their party may be “decimated” by the AfD next year. It may well be the end of the CSU as a political force in Germany as it has failed to grow outside of Bavaria. Yet this is not the core of Germany’s political crisis. 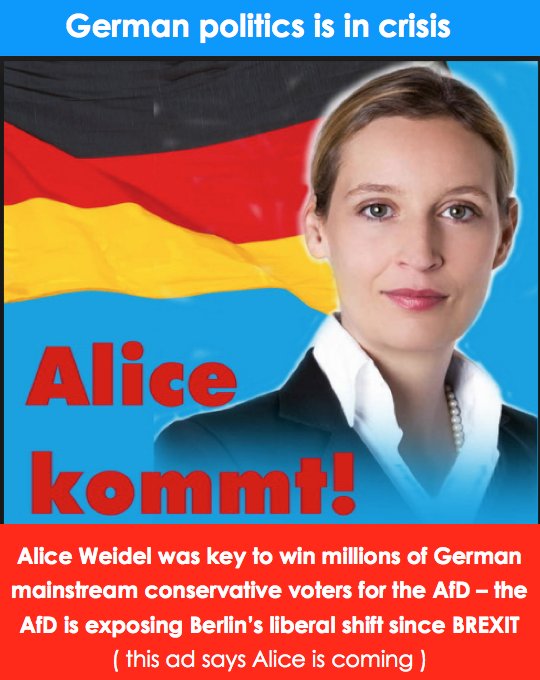 Most political analysts seem to be overwhelmed by or in denial of what is going on in Germany. The reason is not that all this is unfolding suddenly, rather the opposite. Most international analysts know much more about the British, French and EU political process than the German one. They can’t be blamed. Post-war Germany developed an excessive tradition to show to the outside world an image that is always a bedrock of stability, peace and continuity. Add to it the powerful dominance of state TV & radio at federal and state levels, it became boring.

To some extent the trauma of World War II still shapes Germany. Public behaviour and language are captive to the past. So much so, that German reporters and analysts struggle to directly address issues that do not fit with the culture they want to foster and the image they have portrayed to the rest of the world since the rule of chancellor Adenauer.

All of a sudden German politics is on fire, and for the first time in decades all the efforts of official Berlin and the powerful state media to preserve the “image” are not quite succeeding. In any other developed economy, the current crisis would lead to an open showdown. Simply, because all mainstream parties that Mrs. Merkel needs to form a coalition government could greatly benefit from letting Merkel fail to form a government. But Germany is different, unique actually. I feel the crisis itself will last only 2-3 months for two main reasons (see below), but the consequences may shape the future of the EU.

The problem is what will unfold from here until December.

Some key facts from the German elections: the AfD is not the real crisis

Last Sunday 25 Sep 2017 the ruling coalition of Mrs. Merkel lost almost 1 in 4 voters. Most parties lost voters to the AfD, which managed to win the support of some 6 million voters. Immediately, the SPD (Social democrats) announced they no longer want to be in a coalition with the CDU/CSU. But they meant Mrs. Merkel. No mainstream party wants to enter a coalition with Mrs. Merkel any longer. Every party that did that in the past 12 years was decimated by voters 2-4 years later. Merkel has a gentle appearance in public, but many political insiders fear her calculating & tough way of dealing with anyone who stands in her way. That has served her well in the past, but now no one wants to serve as a junior partner in her government.

The AfD has entered the German Parliament with 94 seats. Not only is the AfD now under constitutional protection, the revolt of all German mainstream parties against Mrs. Merkel is magnifying the role of the AfD.
Yet the core structural issue of the German political crisis started almost two years ago: All German parties shifted to the liberal camp due to BREXIT, and they doubled down after the TRUMP shock. It was a collective duty to save the European integration process and the EURO. But to many Germans, their once conservative parties had become liberal center parties. In this tectonic shift, millions of German voters found in the AfD a last remaining conservative party that is still willing to stand out. Some AfD leaders became even more aggressive with their language to take advantage of this. This even led the party chairwoman, Mrs. Petry, to leave the party despite the victory. Those who celebrate the split of the AfD are wishful thinking though. Mr. Gauland is liked by the more angry supporters of the party, while Mrs. Weidel has a clear concept for a wide range of issues that has attracted many mainstream conservatives voters. The two co-heads don’t like each other, but they need each other. Unlike many other German political leaders, the AfD leaders also grasp very well the greater geopolitical trends at play. The AfD is unstable though, it is not a party yet, rather a movement.
Current conclusion: talk conservative until December, try to shift back to the liberal camp in Jan 2018
Our current analysis of the German political process leads us to expect a political crisis to last until December 2017. The FDP may in the end be glad to join the government, because they want to erase their long absence from the government. The Greens could give Merkel the liberal image she needs to fix after the Diesel scandal – cooperating at the beginning and becoming more aggressive over time (eyeing the next elections). The problem will be whether the Greens will accept the morphed CSU. Having followed Mr. Seehofer for years, I feel he will propose a “staged policy course” the Greens may accept. The Greens may talk tough, but take a de facto soft approach until Bavarian elections are over. It serves their agenda too.
Once the government is formed, I expect Berlin to shift back to the de facto liberal course. Otherwise they will let Mr. Macron become the new political leader of the EU. Mr. Macron seems to have the charisma, ability and vision needed to lead Europe, the question is if domestic politics will torpedo his ambitions. He timed his EU speech and the tone of his message perfectly to the German political crisis. For the first time in her political career Mrs. Merkel has found someone that could really win over her: Monsieur Macron.
By the way, the “conservative” talk along de facto liberal policies has been accepted by German voters in recent years. The stable economic rent of German middle class voters explains their leniency for Berlin’s liberal pro-globalist stance and ever closer alliance with China. I reiterate that our geopolitical macro analysis continues to point to a Europe that is advancing towards a European Super State with unprecedented power concentration: political, monetary, fiscal and military. The convergence of crises is what shall overwhelm the nation states.
(We are monitoring also Kurdistan, North Korea, merger of Siemens-Alstom and US Tax Bill)

General Disclaimer: We provide only geopolitical analysis, no asset management nor any type of investment services. Global Macro and Geopolitical Analysis are highly complex and subject to sudden changes. No analytical method is without certain disadvantages. We may change our 3-pronged outlook within less than 3-6 hours following an event or data release. Global geopolitical macro analysis can be extremely time-sensitive and the first 24 hours after an event are critical for the response of a government, corporation, pension or portfolio. Only qualified investors and seasoned decision makers should make use of our geopolitical macro reports and treat them as an additional independent perspective. Every investor and corporate leader should weigh different perspectives as well as “opportunities & risks” before making any decision. Not all our reports, research and intelligence are published. What we release may be delayed and adapted. Most of what we publish on the website is strategic and long term in nature; and aimed at helping decision makers adapt their long term & strategic planning to changing realities, not for short term decisions. If you are not a qualified or professional investor, you should get professional advice before taking any investment decisions.