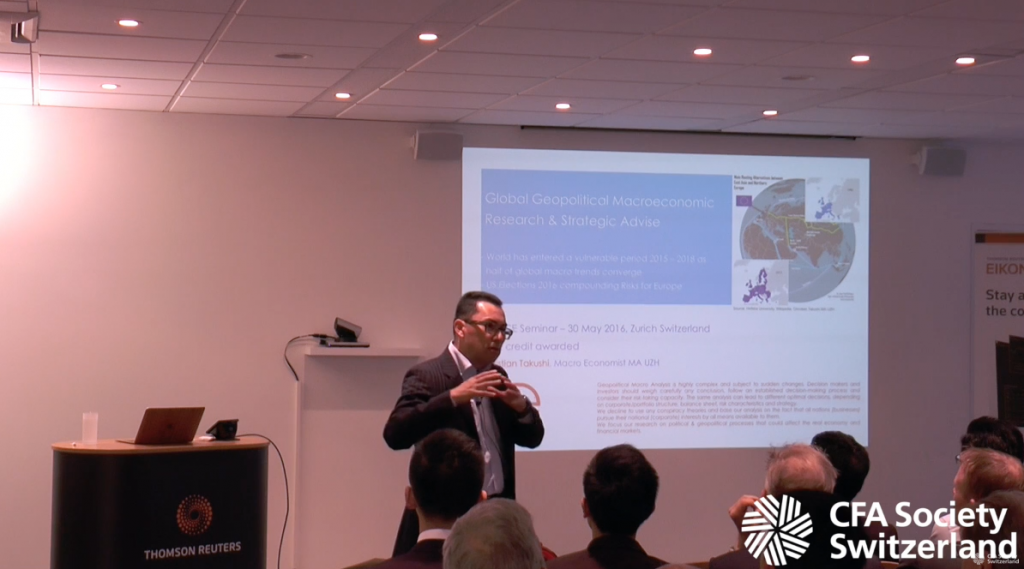 CFA Seminar May 2016: “Change Is In The Air” (transition to a European Super State)

Christian was invited by the CFA Society to give an update of his Global Geopolitical Macro Research. He points to the growing convergence of global macro and geopolitical forces. New emerging powers are asserting their interests ever more aggressively and are going largely unchecked by the West. While people talk about Russia and China, Christian tells people since 2013 to watch Turkey! During this Global Transition (which started at the end of the Cold War) large Emerging Nations are accelerating this convergence process that should end up in a New Equilibrium. The USA is still a formidable force, nevertheless, more confrontations, wars and a major global crisis are likely before we get there. Christian’s Geopolitical Macroeconomic Research shows frictions should reach highest levels during period 2015 to 2018, leading to more crises and/or changes in the World.

According to Takushi the growing confluence of global forces will force Europe to transition towards a European Federation (EF) and finally a European Super State. He foresees major difficulties for European and Swiss firms in the coming years .. as many European firms are caught between more competitive Emerging and US competitors.

The alliance between Turkey and Iran has been born in mutual dependence: Turkey has the economic power while Iran has the religious influence over the masses in the Middle East. Addressing Europe’s strategic failure to secure new Energy Sources and an Energy back up to Russia, the Obama administration is reshaping the Middle East to allow for Iranian oil & gas to flow through Northern Iraq-Syria, Turkey to reach Romanian hubs. From where it can one day supply NATO & EU nations. To that end, pipelines have to be laid in Syria and Northern Iraq. Current Iraq is aligned with NATO, Syria is contested still. Out of fear of Russia, Europe is aligning herself closer with an ever unstable Middle East. To this deteriorating Security Situation of Europe has to be added that many large economies like China, Germany, Japan, Korea etc are experiencing a dramatic deterioration of their Demographics. Takushi points to the the trippling of “Ol” Age Dependency Ratios (ODR), which will squeeze Discretionary Consumption in China, Japan and Southern/Eastern European economies.

Geopolitical Macroeconomic Research is highly complex and subject to changing forces and revisions. All opinions expressed here are his own and reflect the current stage of his analysis. No person should interpret any statement made here as a recommendation to buy or sell any asset. This seminar was a follow-up of CFA CE Seminars Takushi is giving since June 2013.